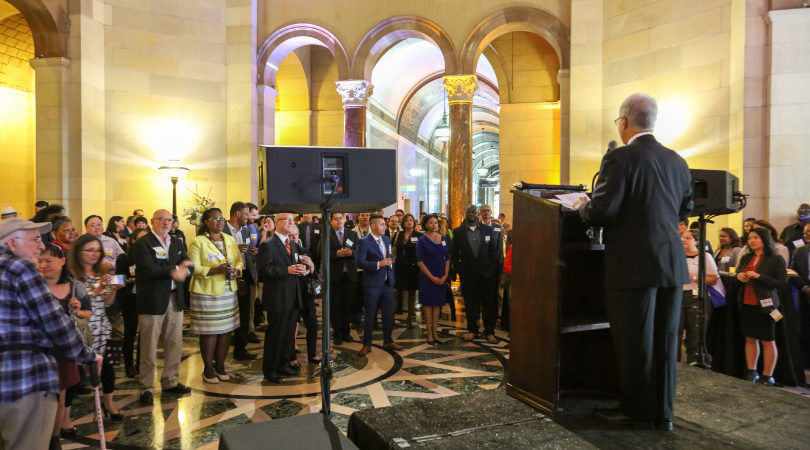 What kind of answer can we give to those who meet with, and feel overwhelmed by, the complex problems and pressures of leadership in larger, multifaceted organizations? Is bliss really possible, and if so, how can one achieve it in the face of professional challenges? Of course there are practical strategies to be used in addressing particular issues that arise in particular contexts, but taking a case studies approach is not our purpose at this time. We have a larger conversation in mind.

What we’re communicating about here is the idea that finding “bliss” sometimes requires us to reach for a higher principle when an aspect of leadership has become difficult. Let’s take a familial scenario as an initial example: Say a parent struggles with a child who screams and kicks the door whenever the child doesn’t get what she wants. An experience such as this can be highly distressing. The parent will likely feels anxious and cross whenever the demanding child goes into a frenzy. Times such as this can be enough to make a parent question why s/he wanted to become one in the first place. And yet it’s precisely times such as this that the role of parent becomes so critical.

Imagine yourself as this parent, and ask yourself why did you want to become one in the first place? Most of us become parents because we want to have a positive impact on the life of a child, to create a set of experiences for a child that are meaningful both to the child and to ourselves. What better time to work toward this goal than when the child needs guidance? A screaming child is not a time for a parent to go into woe-is-me mode, but rather, to demonstrate to the child that it’s possible for a person to remain emotionally balanced even when the context is one of tension. Acting thus, the parent is focusing on the result s/he’s looking for, rather than on the chaotic details of an immediate material situation.

What if you could remain in a state of equilibrium even while juggling a bowling ball, a meat cleaver, and a banana? Would this, rather than any hoped-for outcome for the situation, not be the real accomplishment?

This sort of approach (reaching for or remembering one’s higher principle) of course applies to other areas of life: jobs, relationships, degree programs, diets, etc.–anything that begins in enthusiasm, and calls for a philosophical frame of mind when the going gets tough.

You might conclude that this ideal means that–as President Palmer says on the show 24 (Day 2, 7-8 am)–“leaders are required to have patience beyond human limits.” But we would say it does not mean this, because what we’re advocating is much trickier! If you’re really doing this right, patience is not even necessary.

Patience means that you’re waiting for some result to occur, for some resolution to a problem, or for some condition to come into manifestation that will then allow you to feel ok again: for the child to stop crying, or the weather to clear up, or the paycheck to grow, or the lousy colleague to take another job, or the support of underlings to be expressed. You get the idea. As you probably recognize, the nirvana manifestation never really comes, because as soon as one problem clears up, another makes itself known.

At best, we can get some relief when something unpleasant seems to be over, but if we live in this sort of dynamic–waiting for conditions to be just so–we remain almost always in a state of tense endurance. Bill recalls walking as Provost across campus with his university’s president, and remarking on a set of recent accomplishments and desirable professional conditions, and being told to “wait 10 minutes”–at which time things would certainly go out of order in some set of ways once again.

We want to get to a psychological place where we’re not waiting for some condition to be just so in order to be ok. We want to be able allow the messiness, and undesirable circumstances, and lack of closure, and unfinished business to be as they are. Because then we can feel comfortable far more of the time. We want to feel calm, balanced, and ok whether the outer conditions of life are to our liking or not. Obviously, we all feel better when a set of conditions is to our liking, and we wouldn’t want to give up the discernment it takes to understand the difference. And we do of course want to work to improve conditions, both for others and ourselves. But if we’re not waiting for something to come to closure, or be just so, we’re not in a state of angst, agitating against what isn’t, or isn’t yet so. We can say to ourselves that right now, these are the conditions, and while I don’t prefer them, I’m still able to feel ok, to engage in self-care, and to enjoy my life. No patience is required.

Conditions that Refuse to Change

Leaders do of course take on their roles in order to make positive change, so being ok with undesirable conditions sounds like a dereliction of duty. As we’ve begun to indicate though, allowing what is to be as it is does not need to be at odds with the promotion of positive change. Being ok with what is really only a mental attitude that allows you to approach change from the best personal and professional vantage point. You can both foster improvements while being relaxed about what is. The two dynamics are not mutually exclusive. You can both anticipate, and take steps toward change, without requiring it to be in place for your well-being. The two ideas are only seemingly contradictory ideas, only seemingly in tension with one another, in a context in which change is often approached in the wild west/heroic style of blasting undesirable conditions into oblivion in an effort to utterly destroy them.

Stubborn problems may bring out a feeling of violent objection within us, and the work of being about a higher principle would be to learn to abandon that sort of impulse (however merely internal it may remain). Setting aside the fact that the improvements you’re seeking would benefit both your peace of mind and the lives of others, you might at times actually be grateful for the current situation’s refusal to change. The bad conditions are inviting you to change. You see, you get better at coping with stubborn problems only when the conditions refuse to change. How else would you practice this ability? In other words, you might look at the stubbornness of undesirable conditions from the perspective of the higher principle: as an opportunity to evolve.

It’s far more common/conventional to work on changing conditions, than it is to rest, even momentarily–in allowing that they are what they are. But many things change only very gradually, and others simply can’t be changed. When Bill left one university for another, a friend pointed out that Bill would be happy to be rid of a certain troublemaking colleague, but Bill replied, “There will always be another _________.” How true! If you can’t feel good until conditions are exactly to your liking, you will likely never feel good!

So, the philosophical (dare we say spiritual) work here is to not need for things to improve while simultaneously taking well-considered action to improve them. It’s a delicate balance. And it’s not for those who get into the never-ending struggle to force change, but instead for the real leaderly heroes, who guide change from a place of inner quiet. When you’re able to better manifest such inner strength, you recognize it in yourself, which is a great feeling. Also, without getting too woo-woo about it, the authors have noticed that when we let go of the need for conditions to change, they often seem to yield somehow of their own accord.

You Are What is Changing

What if the accomplishment–for now–is your own evolution? Would it be so wrong to be self-referential to this extent as a leader? Debbie always asks her coaching clients, “What’s your biggest achievement?” Clients then typically cite a material achievement, such as obtaining a degree, starting a business, buying a house, or starting a family. Debbie’s response is to ask the client what it would be worth to be able to master his/her inner state such that he/she could see a benefit in all circumstances. Debbie’s regularly met with the enthusiastic reply that it would be worth so much more than any material achievement.

There’s a big part of you that wants to show yourself that you can do your leadership position correctly from the inside out–in mental attitude–as much as outwardly in terms of making improvements. While you can’t always/perfectly control material conditions, you can always learn to control your own inner state.